Accidentally committing a large file (i.e. greater than git's limit of 100MB) is a frustrating experience. For example, let's say you made some changes to big_file.bin, a 200MB file, and to your README in the following way:

Everything is fine, until we try to push to our repo:

Here is an attempt to fix that fails:

The problem is that git is trying to keep track of the history of all your commits. Git wants to push both the file and the fact it was deleted, so other developers can rewind the deletion. To do this, git still needs to push the large file to the remote, which it cannot do for large files.

We will look at two ways of fixing this problem: Rewinding master locally, and pushing a new version of master. The downside is big_file.bin will still take up memory on your local repo. Removing all mention of big_file.bin from your repo by rewriting your git history. The downside to this approach is that you can break git, and it cannot be done if you have untracked files.

Let's look at these two approaches. If all else fails, the third option is to make a new clone of the repo, and copy over just the files you want -- but this should be a last resort.

We want to get rid of the file originally committed in commit 9cee256. To do this: 1. First, reset back to that commit:

This is a soft reset, so your files will stay the same on your local machine. 2. (Optional) If you haven't done so already, you can delete big_file.bin. 3. Then add the README back to the repo, and commit it

In this approach, the local git history still has the "bad" commits in it 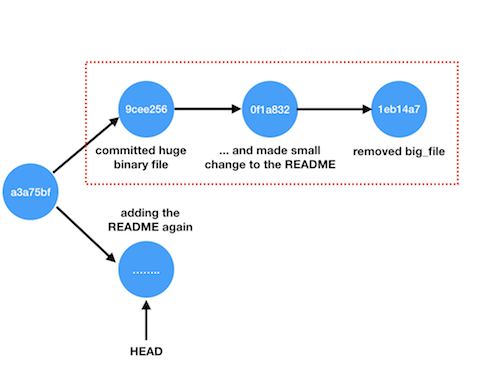 They are off the main "master" track, but they will still remain on your disk. The commit you pushed up doesn't have the commits in the red box in its history, so the remote repo will look like this: 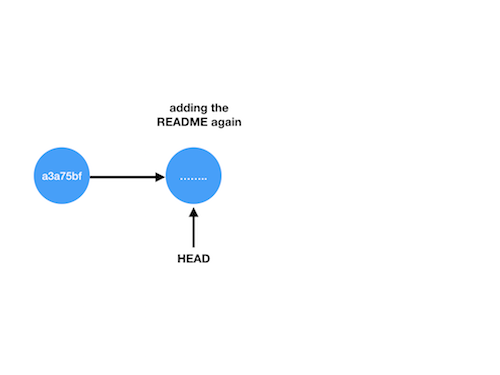 This one will only work if you don't have unstaged work in your repo. It also means rewriting the history, so there is the potential to mess things up!

With those warnings in mind, you can run

This will remove big_file.bin from every commit from 9cee256 to 1eb14a7 (the current HEAD).

You should then be able to push to your repository with

Undo in Github (aka the elephants in the room)

How to rollback in Github