This post is part 4 of the "Empirical Bayes" series:

We have some collection of binomial distributions, where each one is modeled as having a probability of success \(\pi_i\). For example, individual baseball hitters have a probability \(\pi_i\) of hitting the ball that depends on the particular batter \(i\). In the example investigated in this series, we looked at the kidney cancer rate on a per county basis. We are interested in using information about the population distribution of \(p_i\) to help us get better estimates of \(\pi_i\) than just the number of successes over number of failures for the experiment \(i\).

We will show, under some reasonable assumptions, that a better estimate can be found with

Using Bayes's theorem, we have

The likelihood is just the binomial distribution: if we know \(p_i\) and the total number of trials $N_i $, then

Now we have to decide on a prior. Following the discussion from the article on deriving the average rating, there is no single correct choice for the prior. We are going to start off with the beta-distribution, and show why it is a convenient distribution to use, and then finally come back to describe how to check if the beta distribution is appropriate.

The PDF for the beta distribution is defined on the interval [0,1] by

The \(\beta\) distribution should look reasonably familiar. It looks like binomial distribution with probability \(\pi_i\), \((s_0 - 1) "successes" and $(f_0-1)\) "failures", but there are some important differences:

Once the parameters \(s_0\) and \(f_0\) are given, we can give the expected value and variance of the beta distribution:

Back to Bayes theorem

The expected value for the a posteriori distribution is

Technically, this is not the maximum of the a posteriori distribution. We could find that by maximizing \(\ln P(\pi_i | s_i)\). The result is

I generally prefer to use the expected value instead, because the interpretation is a little simpler. Note that as in the rating case, we also have the variance of this distribution, so we can assign credible intervals as well as having the "point" estimates.

What is a conjugate prior?

We introduced the notion of a conjugate prior when deriving the result for shrinking average ratings. It was a little tricky there, as all the distributions were Gaussian!

That is, the beta distribution is a conjugate prior to the binomial distribution/binomial likelihood.

Ultimately, our goal is to make predictions that resemble reality, not to make things convenient for mathematicians. Again, we face the problem of having to justify the prior, which Bayesian statistics gives us no tool for doing: the prior is something you have to produce in order for Bayesian statistics to work with and update. The idea of abandoning empiricism and picking a prior based on mathematical convenience becomes seductively appealing....

Instead of abandoning empiricism, we are going to embrace it. The philosophy of empirical Bayes is to allow the measured population values inform your choice of prior. We start by considering the distribution of all the different measured proportions \(p_i = s_i/f_i\), and choose \(s_0\) and \(f_0\) to best fit this distribution.

Another approach is take a numpy array p containing all the \(p_i\) values, and use the built-in beta.fit(p). This returns four values, the first two of which are the best fit (in the least mean squares sense) for \(s_0\) and \(f_0\).

These are procedures for finding the best-fit values for \(s_0\) and \(f_0\). How can you tell if they are any good? Ultimately you will want to compare the generated beta distribution to the actual distribution of \(p_i\). In the kidney cancer example, we saw reasonable (but not great) agreement: 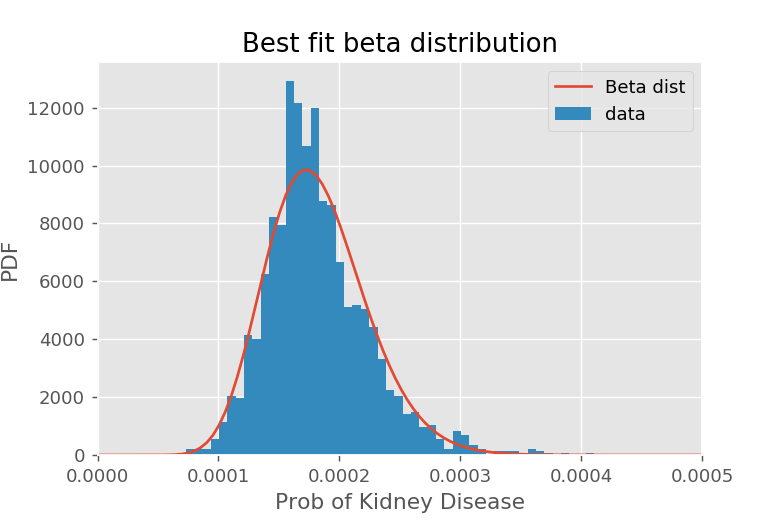 We can see a small bump around \(p_i = 0.00023\) which suggests we may actually have a mixture of beat distributions. It is up to you whether you think this prior is appropriate, or whether you should use a better one.

Remember that empirical Bayes doesn't require use of the conjugate prior -- that just allows our results to be written in the nice, compact form. If we wanted to use a prior that was a mixture of different beta distributions (for example), we could do so, but determining the a posteriori distribution will now generally be a lot more involved.

The definition of the beta distribution, with the \(s_0 - 1\) and \(f_0 - 1\) in the powers, leads to a few inconveniences (ultimately these can be traced back to the weird definition of the Gamma function in mathematics).

This is the first in a series of blog posts where we go through the process of taking...

This article contains derivations when applying the shrinkage methods of empirical...